Until I started my own blog, I had only passing interest in the debate on whether bloggers should be considered journalists. Since my own credentials as a journalist should withstand any scrutiny, it’s not really a problem for me personally. And, I don’t plan to make this a news blog. It will be mainly opinion. But what about other bloggers who haven’t spent more than a half century in the daily journalist trenches and who try to put their version of news events on their blogs? Do they qualify for the “journalist” moniker?

To decide that, I think we first have to come up with a suitable definition of journalist. For a lot of my career I have eschewed the label, preferring at various times in my checkered career reporter, newspaperman, newsman, editor or even news executive. But now that I am retired, I find the term comes in handy because none of the other terms sums up my career quite as well.

Webster’s New World College Dictionary (fourth edition) says a journalist is “a person whose occupation is journalism; reporter, news editor etc.” It defines journalism as “the work of gathering, writing, editing and publishing or disseminating news, as through newspapers and magazines or by radio or television.” I was disappointed that Webster’s didn’t include wire services or the Internet in that definition. Perhaps the dictionary’s editors aren’t aware of the important role wire services, and more recently the Internet, play in gathering, writing, editing and disseminating news.

Otherwise, Webster’s New World College Dictionary definition was the best I have seen because it also would include free lancers.

So, with this definition in mind, are bloggers journalists?

The key word in the definitions, I believe, is news (a term subject to various interpretations also, but I’ll try to deal with that in a later post).

If the blogger goes out and gathers the news, checks the facts with reliable sources, writes it in a way to make it understandable to other people and disseminates it to the blogger’s Internet audience, then certainly the blogger should be considered a journalist.

If on the other hand, the blogger is just giving a personal opinion without checking the facts or is just passing along somebody else’s opinions without citing sources or making an effort to check facts and present a more than one side of an issue, I don’t think the blogger is a journalist.

Should bloggers be given press credentials? I think that bloggers who have demonstrated that they are trying to practice journalism in a professional manner should indeed be given press credentials. That said, in my more than 50 years in the business, I have rarely needed a press credential to cover the news. You need a special press pass to get into some events (a presidential visit comes to mind) or to sit in the press gallery at the U.S. House or Senate, and these are handed out on a case-by-case basis. But most of the events we cover are public and you don’t need a press credential to cover a public event. So whether a blogger has a press badge isn’t really a big issue, in my opinion. (The best press badge I ever had was a beautiful thing with PRESS in large gold embossed letters on a maroon background. Underneath in smaller type it said, “your pants while you wait. XYZ Dry Cleaning.”)

Some countries license journalists. They claim it is a way to maintain professional standards in the press. The truth is it’s a way of controlling the press. If you don’t play along with the government, you could lose your license. Fortunately, that doesn’t happen in this country. In the past, anybody who could afford a press could publish a newspaper and he and those who worked for him were by definition journalists. Now, thanks to modern technology, anyone who can afford a computer and an Internet connection—and that seems to just about everybody can be a blogger. So just about anybody can be a journalist. Newspapers range from supermarket tabloid scandal sheets to serious journals like the New York Times and the Washington Post. I’m sure it will be the same in the blogosphere, but it will still be journalism—just a different kind.

This headline appeared recently in the Knoxville News Sentinel:

I suppose that’s one way to end the Iran nuclear threat, but it seems odd that Iran would do the inviting to nuke the sites.

About a year after I took over as AP correspondent in charge of the bureau in São Paulo, Brazil, the U.S. Consulate there got a new press officer, Gene Harter. I don’t recall the circumstances of our first meeting, but I do remember that there was an instant affinity. Unlike most of the guys who turned up in such jobs, Gene was a veteran newspaperman. He knew the business inside out, and although he had never worked as a foreign correspondent his background gave him a good understanding of what we were doing. More importantly his background endeared him to Brazilian newspapermen, particularly those in smaller cities  who were struggling to adapt to more modern technology. Gene was a big help to them because he had also sold presses for Harris-Intertype in the early 1960s and understood the technology.

I remember well the first time I met Dorothy, Gene’s wife, and their four children. It was at a dinner party at their home and that was, as Bogart told Raines at the end of Casablanca, the beginning of a beautiful friendship, one that lasted despite distance and time.

Among the guests was Claudio Abramo, controversial editor of Folha de São Paulo. Inviting Abramo was a daring, but, as I learned, not untypical move that exemplified Gene’s courage. Abramo was a thorn in the side of the military government, resisting censorship and speaking out against torture. Gene’s support, with the implied backing of the U.S. government, probably kept Abramo out of jail and at his job at Folha.

An even more memorable moment for me came a few weeks later when Gene invited me to accompany him and visiting Gov. Jimmy Carter of Georgia on a trip to Americana, home of the last surviving “colony” of descendants Southern Americans who had immigrated to Brazil following the U.S. Civil War.

Gene, Jody Powell, Carter’s right-hand man even then, and I rode up to the Americana suburb of Santa Barbara do Oeste where descendants of the Confederados from throughout Brazil had gathered at the little stone church and Confederate monument. I remember Powell commenting on the way there that the terrain was much like that of parts of Georgia.

Carter was coming by helicopter and had planned only about 15 minutes for the stopover before going on to Campinas to visit the Purina plant there.

Gene Harter, left, with then Gov. Carter and Judith and Jaime Jones under the Confederate battle flag

The crowd gathered (see picture) at the monument and Carter said a few words. Then somebody asked him if he would step into the nearby church and say a prayer. I think his prayer lasted more than 15 minutes. Afterward, he and Rosalynn discovered thecemetery and spent a long time going from headstone to headstone reading the inscriptions. By the time they were ready to leave it was too dark for the helicopter to take off and a car had to be arranged to take the Carters back to São Paulo. They had missed their visit to the plant.

Gene later wrote The Lost Colony of the Confederacy about that post-Civil War migration to Brazil. A paperback version is still in print. Gene and Dorothy made several lecture tours on the book, including voyages on luxury liners.

Before becoming a diplomat, Gene owned and published a weekly newspaper in Campbellsville, Kentucky, the News Journal. He ran unsuccessfully as a Democratic candidate for Congress in Kentucky before going to work for the government.

Another interesting but less well-known book by Gene is Boilerplating America: The Hidden Newspaper, a history of the use of pre-printed articles distributed to small newspapers throughout the United States in the period between Civil War and the turn of the century.

Gene and Dorothy were the perfect writing team. He wrote and she edited.

Gene and I went our separate ways after Brazil, but we kept in touch. Our paths crossed again years later when both of us were living in the Washington, D.C., area. The Harters were living on their houseboat on the Potamac River and Gene would walk to work each day at the State Department. Later Ghislaine and I would visit them on the houseboat, which included a fireplace, in Chestertown, Maryland, after Gene retired. They lived in a beautiful old house on Main Street. 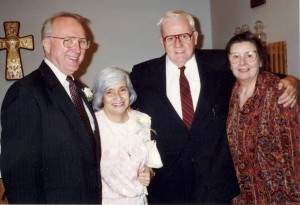 When Ghislaine and I celebrated our 40th wedding anniversary, Gene and Dorothy came, driving the camper in which they were touring the country.

And, by sheer coincidence, when they celebrated their 50th anniversary, the guitarist their children hired to play was our son Richard.

A book could be written about Gene, and perhaps Dorothy will do just that.

Friendships like this are rare and golden. We’ll miss Gene.

From where I sit

The thing I’ve missed most since retiring from the news business in 1999 is writing a personal opinion column. I penned columns for various publications for a good part of my journalistic career. Now, I’ve decided to become a blogger, a word that didn’t even exist when I started my professional career more than 55 years ago. I plan to write on the things that interest me, so there will be no particular theme to my ramblings. I will welcome your feedback.

At the same time, I am publishing my memoirs on this site. I’ve been working on them off and on (mostly off) for several years, but I realized as I enter my twilight years that I’d better get them finished or miss the chance. The Web seems to be a great place to do this. My personal story probably won’t be of interest to many, but I will be most interested to hear from anybody who is brave enough to read all my verbiage.

In one sense, it seems egoistic to write one’s memoirs. On the other hand, it is a chance to leave a record of many things: life in a small mountain town in the 1930s, a newspaper career at the end of print journalism’s golden era, and a romance that defied all odds. I hope that at least it will be an opportunity for my grandchildren to know who their grandfather and grandmother were, and to appreciate their ancestors. My dad was a great story teller, but his stories, except for poorly remembered excerpts, mostly died with him. I guess I want to continue to bore people with my stories even after I’m gone.