In 1934, after a day of shopping in Knoxville, Louise and Mabel Miller, the wives of brothers Kyle and Hudson Miller respectively, were resting in the women’s shoe section of Miller’s department store on Gay Street before returning to Jellico.

Louise excused herself and rushed off to the women’s lounge on the store’s mezzanine. When she came back, Mabel urgently had to go to the same lounge.

The attendant in the lounge told her, “You’re the second pregnant Mrs. Miller that’s been up here this afternoon.”

That’s how my mother learned that her sister-in-law was also pregnant. Neither had told anybody. 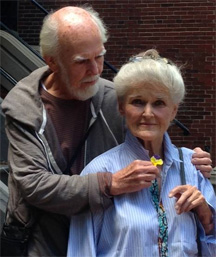 From the beginning of our lives, Lida and I, along with another first cousin, Emma Jo Vaughan, daughter of the Miller brothers’ sister, Esther, and Lida’s older brother, Sheffy Miller, were almost inseparable.

We played together, often traveled together, and celebrated birthdays together. Lida, Emma Jo and I were in school together from Miss Reese Templeton’s kindergarten in 1939 until high school graduation in 1952. Sheffy attended the Tennessee Military Academy for high school. A younger brother, Jimmy, died in the 1970s just as he was reaching the top of his career as a TV news anchor in New York City.

After high school, our lives went in different directions, but we never lost touch with each other.

For me, it was first the Army, then a career in the news business that took me to various places, including 13 years in Latin America.

Emma Jo married and lived in Knoxville until her death May 14, 2009. Sheffy also served in the Army and later became a vice president of a large insurance company in Houston, Texas. He died March 11, 2002.

Lida got a degree in commercial art at Auburn University in Alabama and quickly landed a job in a New York City advertising agency. She rose quickly from the “bullpen” to become a top designer.

She later married her college boyfriend, Austin Lowrey, and they had two beautiful daughters, Sheridan and Elizabeth.

After many twists and turns in her life, Lida wound up in Los Angeles, pursuing her first love, art. She became known as a muralist and an artist whose works have been displayed in many galleries and museums.

Eventually, she and Austin moved to San Miguel de Allende in Mexico where they built a beautiful modernistic home that has been written about in architectural magazines.

Here’s how the architectural magazine Dwell described it:

“Within two days of their first visit to Mexico’s historic town, San Miguel de Allende, Austin and Lida Lowrey purchased a property with the intention to build their dream home.

“The retired art and design veterans visualized a larger space which incorporated personal studios where they could relax, paint, write and enjoy the laid-back Mexican lifestyle.

“The result is an incredible property driven by two creative minds. The three pavilions sit within the natural, landscape of cacti, wildflowers and native grasses.

“Lida’s studio is positioned on the north side and Austin’s on the south.  Sandwiched in between the two and accessed by an enclosed glass bridge, is a living area that open’s up entirely to the outdoors.

“‘We all decided we didn’t like front doors on houses because they were intimidating,’ Austin tells Dwell. ‘So as you come up, this cage envelops the house, and you see right into the living room, which opens up totally to the outside.’”

“Using organic materials, local artisans, and modern design methods, the couple have created a truly personal family retreat. The building and landscape are continually evolving as the artists experiment moving from canvas to sculpture and installations around the property.” 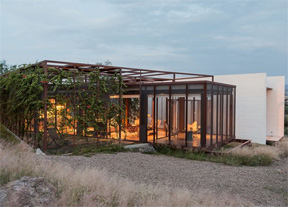 Lida insisted on remaining in San Miguel even as her health declined, and she died there Saturday, September 5, 2020.

I had not seen Lida since she and another childhood friend stayed with us when they came to Knoxville for Emma Jo’s funeral. Prior to that we had been together several times with other members of our kindergarten and high school classes in Charleston, S.C., where another Jellico High School alumnus, the late Dick Davenport, lived.

But, despite the separation of distance and time, that childhood bond between us has never been broken and soon will be restored on another level.