It was love at first sight—or pretty close to it—at least on my part.

I was on a sightseeing bus, waiting for our tour of the Vienna Woods to start. The other buses in the group had already gone, including the one with the cute Italian girl who had been flirting with me on the morning tour of Historic Vienna. I wondered what was holding up our departure. Outside a taxi screeched to a halt and a white-haired man and a young woman alighted and hurried to our bus. I learned later they had missed the bus when it stopped at their hotel a few minutes earlier.

The young woman came down the aisle, looking first at one then the other of the two empty seats left on the bus, one next to me and one across the aisle. She was an olive-skinned beauty with silky black hair pulled back into a severe bun. 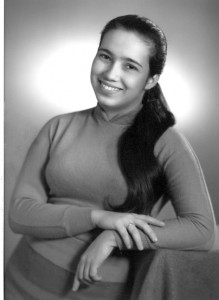 I couldn’t take my eyes off her. And I couldn’t believe my good fortune when she chose the seat next to me instead of the one across the aisle.

Her companion took the other seat, and they started conversing in a language that I couldn’t identify, despite my language training at the Army Language School and my efforts to learn to identify all European languages. It gave me the opening I needed.

The tour was to be in English and French, and the tour guide asked how many people preferred French. Only two hands went up—the late-comers. When they saw they were the only ones who wanted French, the man told the tour guide that English would be fine. When the guide finished her introductory remarks, I asked the girl at my side what language she was speaking.

“Portuguese,” she replied in heavily accented English. “We are from Brazil.”

I learned that she was from Rio de Janeiro and, to my relief, added that the man with her was her father. I had thought it might be one of those May-December couples. I also learned that her father, a physicist, was Brazil’s representative to the first International Atomic Energy Conference, a gathering organized under President Eisenhower’s “Atoms for Peace” plan. Her name was Ghislaine Costa Ribeiro.

Our tour took us to the Stift Heiligenkreuz, an ancient Cistercian monastery deep in the Vienna Woods. As we walked through the old church, she asked me if I was Catholic. By coincidence, I had just days before my trip to Vienna decided to become Catholic, so I replied “yes,” even though I was not yet officially a communicant. I didn’t know it at the time, but that answer was pivotal in our future relationship.

After the monastery, we stopped at a restaurant where we had a Sacher torte and tea while a pianist played Hungarian love songs.

It was October 5, 1957, a crisp, sunny day. The leaves in the Vienna Woods were at their magnificent peak of fall color. It was a setting for romance.

As the bus returned to Vienna, we watched a spectacular sunset, bringing to a close a perfect day. As the bus wound its way through the city streets, Ghislaine had a short conversation in Portuguese with her father, and as the bus stopped to drop them at their hotel,  he asked me if I would like to join them for dinner. I eagerly accepted, arranging to meet them at the Ambassador Hotel later that evening. From the moment she sat down, I had been mentally and vainly scheming for some way to continue my acquaintance with this girl. I never dreamed that she would take the initiative.

My civilian wardrobe was limited. I had a single tweed sport coat that I had bought in Munich and one pair of dress pants. I fortunately had also brought a dress shirt and tie.

I arrived at the Ambassador at the appointed time and found Ghislaine’s father, Professor Joaquim Costa Ribeiro, in the lobby with a group of men.

“Ah, yes, the young soldier,” he exclaimed as I approached. He then introduced me to the men. I was awed as he identified one man as an ambassador, and another as an admiral, and others as “doctor.” He introduced me as a “young officer in the American Army.” I didn’t correct him at the moment, but later pointed out that I was actually nothing but a lowly enlisted man.

Ghislaine was still getting ready, he explained. We sat down and talked until she finally appeared. If I had been smitten on the tour, I was doubly so now. She appeared wearing a silky, blue polka dot dress with a full skirt, as was the fashion in those days. Her thick shoulder-length hair, now freed from its restricting bun of the afternoon, was pulled back and hung loosely over her shoulder.

The men jumped to their feet as she went to each one to shake hands. Professor Costa Ribeiro announced to the group that we would be off because the “young officer has invited us to dinner.” I must have gasped because I had barely enough money in my pocket to pay for my own dinner if it became necessary—and he had invited me, after all. As we left the hotel, he quickly explained with a chuckle that the dinner would be on him, but that he had expressed it that way to keep one of the men—a crashing bore who had invited himself along for earlier excursions—from horning in on this one.

The restaurant, a few minutes’ walk from the hotel, was huge and elegant. It featured an orchestra for dancing, and Ghislaine and I quickly took advantage of it. I’m sure we ate at some point, but mostly, it seems, we danced and danced. At one point, she danced with her father, who had asked the orchestra to play Brazilian sambas.

I also got to know her father a little better, discovering that we shared interests in many things, including mystery stories by Agatha Christie and Erle Stanley Gardner, and the poetry of Edgar Allan Poe.

As we walked back to the hotel, the professor told me they were going to attend a Mass at the Imperial Chapel of Vienna’s Hofburg Palace at which the Vienna Boys Choir would sing. I agreed to join them. We discovered that Communion at the Mass was closed to the general public, so we went from there to Vienna’s newly restored St. Stephen’s Cathedral to attend Mass again so Professor Costa Ribeiro and Ghislaine could receive Communion. Since I was not officially a Catholic, I could not receive the host.

After the Mass, we went to the Griechenbeist restaurant for lunch. The restaurant, built in 1400, still has cannonballs from the Napoleonic invasion and its walls carry the autographs of Beethoven, Mozart, Wagner, Mark Twain, and other famous figures who once dined there.

Years later, long after I had learned to read Portuguese, I discovered and read Ghislaine’s account of our meeting, reported in letters home to her brothers and sisters in Rio. In them, she told in detail about her experiences in Europe, including meeting the American soldier in Vienna. She later typed all the letters and made them into a travel diary, which we still have.

Here’s her description of the tour of the Vienna Woods:

After visiting the abbey, we returned by another highway through the wine country. We learned from the tour guide that Viennese wine, unlike others, is good only in its first year and the newer the better. It’s the wine they call Heuriger.
On the way back, we also stopped at a restaurant in the midst trees of green, red and yellow in the Viennese Woods, alongside a little stream filled with white rocks. In the restaurant, we had tea to the sound of Viennese music played on a piano.
As we returned, it was getting late and we saw a beautiful sunset. It was a beautiful outing and on it we got to know a very simpatico young man, an American who was visiting Vienna for the first time.

We invited him to have dinner with us. We went to a restaurant in one of the gardens of Vienna. We knew that they had dancing, but we never imagined that the orchestra would be so good. We dined and danced until 10:30. It was excellent. At a certain moment, we asked the musicians to play a samba and they played “Aquarela do Brasil” … “with a lot of rhythm and I danced with Daddy. I was able to get to know the young man better. He’s an American from California and he is in Munich doing his military service in the “Intelligence Service.” He and Daddy talked a lot about books and authors and we learned that he is from a Protestant family, but that he converted to Catholicism. We agreed to go to Mass with him the next day. On Sunday we went to the 9:30 Mass in the chapel of the Imperial Palace, a Mass sung by the Vienna Boys Choir. It was beautiful (music of Mozart). We three went to have lunch at the ‘Greek Restaurant’ which I’ve already told you about, at half past noon, and we said goodbye to the young man, who is called Ed Miller, as he was going to catch his train to Munich. We agreed to write each other because he also is going to Paris next month.

My spur-of-the-moment decision to go to Paris came when Ghislaine told me she and her father would be visiting relatives there in November. I had leave time coming, and I was pretty sure I could get the time off.

I boarded my train back to Germany determined not to let this girl slip through my fingers. I was in love. And I knew then, instinctively perhaps, that I wanted to live the rest of my life with her.

I was so confident that on the train I wrote my parents a picture postcard showing St. Stephen’s Cathedral that said:

Hi, Here you see the beautiful cathedral where I attended Mass this a.m. Later I went to the Imperial Palace church where I heard the Vienna Boys Choir. I have had a terrific time. Incidentally I’m in love and plan to get married. Hope you can read this. I’m on a train and it’s rather bouncy. Love, Ed 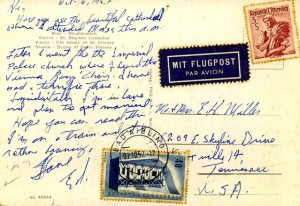 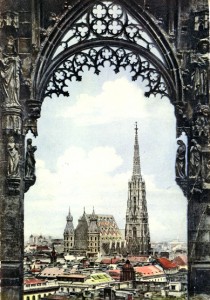 4 Responses to Prologue – Meeting in Vienna