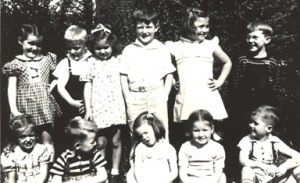 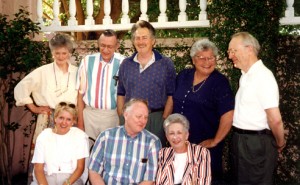 My formal education began in Reece Templeton’s kindergarten on Cumberland Avenue in 1939. There were 11 of us in the class (listed from left to right in the picture above): standing: Lida Margaret Miller, Jimmy Bealle, Madelyn Lowe, Hugh Finley, Doris Ellison, Ed Miller; seated:  Dickie Davenport, Mary Mahan McCall, Emma Jo Vaughan and Billy Ballard. Madelyn Lowe and Mary Mahan left Jellico shortly after that, but the rest of us grew up there and formed the nucleus of a band of friends who have remained close despite time and geography. We got together for the first time since high school in 1981 when our graduating class of 1952 held a reunion in Knoxville. Our little group had its own special reunion. I recall a certain nervousness at re-encountering these childhood friends. Our lives had all taken such different routes since Jellico, and I wondered if we would have anything in common. We didn’t have much except our Jellico upbringing—and that was enough. The years melted away in minutes and we had re-assumed our youthful personae. In 1996, we got together again, this time in Charleston, South Carolina, where Dick Davenport lives. Incredibly eight of the original 11 kindergartners were there. (We posed for a picture in the same order as we appeared in 1939). We were missing only Billy Ballard, who had passed away, Madelyn Lowe and Mary Mahan McCall. It’s the only kindergarten reunion that I’ve ever heard of. We’ve held several more since, but each time mourning the loss of one or more of our friends.

My cousin, Emma Jo Vaughan Salmon, who died May 14, 2009, wrote about that incredible 1996 kindergarten reunion, shortly after it occurred. Here’s her account:

In spite of my frequent paddlings and other punishments for disruptive behavior in elementary school, I remember all my teachers fondly, and I think I learned a lot. My grades weren’t outstanding, probably because of my behavior, but I got by OK.

I was pretty independent as a child. When the doctor decided that I needed to have my tonsils and adenoids removed, I insisted on going to the hospital by myself, even though I was only 8 years old.

Jellico, in spite of its veneer of civility, was a pretty rough place in those years. Disgruntled coal miners would dump loads of coal in front of businesses they thought were not supporting them in a strike. Stabbings and shootings occurred in the beer joints just outside of town every weekend. One episode that stands out in memory came when I was in the eighth grade, not yet 12 years old. It was the lunch hour and for some reason I had gone to town instead of eating lunch at school, as I usually did. I had just about reached Blankenship’s store on South Main when I heard shots and saw a man fly across the sidewalk. I learned later that the two men, Alonzo Cox and McKinley Blankenship, had been in an argument, apparently over some sort of love triangle. As I recall, the shooter claimed he fired in self-defense. The men, according to witnesses quoted in press accounts at the time, scuffled, then Cox pulled a pistol and fired four times, three of the bullets hitting Blankenship and killing him almost instantly. A woman bystander also was slightly injured by a stray bullet.

Sheriff Rose Kitts was quoted in an AP story published in the Knoxville Journal as saying, “Cox told me Blankenship started the fight and threatened to kill him.” Blankenship, described as a former Elk Valley merchant, had just had lunch with his brother, H.D. Blankenship, owner of a small dry goods, when the shooting occurred.

The press accounts didn’t mention it, but people in Jellico who recall the shooting say that Blankenship was not armed. Cox hired one of the state’s top defense attorneys, Ray Jenkins, the Knoxville lawyer who eventually won national fame in the McCarthy-Army hearings a decade later, and was acquitted. Prosecuting for the state were Howard Baker Sr., the attorney general and later long-time congressman, and the incumbent 2nd District U.S. representative, John Jennings. Baker was the father of Howard Henry Baker Jr., the former senator and chief of staff for President Reagan. The shooting occurred on September 25, 1946, a Wednesday. The not guilty verdict was returned on Friday, December 20, 1946: speedy Campbell County justice. It was interesting to note in the news stories that one of the many eye-witnesses to the shooting was Aunt Susie Nobles, my Grandfather Baird’s sister. She had an apartment just over one of the stores near where the shooting took place. A news story said she had just arrived from Knoxville, no doubt riding in her chauffeur-driven, maroon 1939 Buick.

I was asked, along with numerous other eye-witnesses, to come to the preliminary hearing before a justice of the peace at the City Jail. Daddy went along with me, but I was never asked to testify  and was not called to appear before the grand jury in Jacksboro. The matter was dispatched speedily, with Cox being bound over to the grand jury under $10,000 bond.

Next: Don’t call me four-eyes