Is abortion the preeminent issue for Catholic voters?

Bishop Richard F. Stika, in a lengthy article in the East Tennessee Catholic, his diocesan newspaper, has posed for Catholics in the Diocese of Knoxville what he calls some “tough questions that you must answer.”

I have decided to try to answer some of them and also to pose a few to him as well.

Basically, Bishop Stika, without naming names of candidates or parties is urging his flock to vote based on a single issue: abortion.

He calls it the preeminent issue, noting that “19,000 unborn children are ‘surgically’ aborted” each week in the United States. His statistic is outdated. The latest statistic, according to the Guttmacher Institute shows that the number is about 16,500. Centers for Disease Control statistics show even fewer abortions than reported by Guttmacher. That’s still too many, of course,

But what he fails to mention is that since the 1980s, abortion rates in the United States have been in a steady decline. Nobody knows how many abortions wer 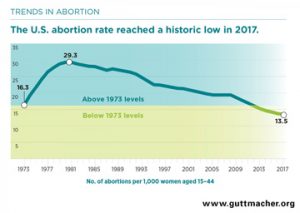 e performed each year before Roe v. Wade, the Supreme Court decision that legalized abortion as a woman’s right, but one indication of the difference is that more than 200 women died from abortions in the U.S. in 1965, only two such deaths were recorded in 2015.

So, my question to Bishop Stika is: Do you believe that overturning Roe v. Wade will eliminate or reduce the number of abortions in this country?

It is very likely that this Supreme Court ruling will be overturned by the new court with the three Trump appointees. What is likely to happen when that occurs?

First off, it will then be up to the states to pass their own abortion legislation, outright banning and legalizing with various variations. In those states where it is banned, women wanting an abortion will travel to places where they can get one. Poor women who can’t afford to travel will have to resort to other, illegal, methods. Many will die.

Or, it could be that Congress will pass a national law either banning or legalizing abortion.

Some other points in the bishop’s argument raise questions.

He suggests that Catholics should consider the party platform, not the personality of the candidate.

My question is: Do you believe that the Republican Party or the administration after four years in office followed the platform adopted in 2016?

Perhaps the only item that was achieved was getting justices on the Supreme Court who will likely overturn Roe v. Wade.

The administration lowered taxes, mostly for the rich. They pledged a balanced budget, but government data release Oct. 16 showed that the “U.S. budget deficit eclipsed $3.1 trillion in the fiscal year that ended Sept. 30, … by far the biggest one-year gap in U.S. history.” I understand that part of this deficit was caused by measures to combat the Covid-19 corona virus, but it is also because of the uncontrolled spending of the administration.

They pledged immigration reform, but all we got was a ridiculous, billion-dollar piece of a wall. In the meantime, our treatment of those seeking to enter the country has been shameful and disgraceful.

They pledged to replace the Affordable Care Act with something better. They weakened it, but they have yet to come up with any plan at all to replace it. If the Court overturns ACA, that will leave millions without insurance.

Bishop Stika likens the abortion issue to the slavery question in the 1800s.

Abortion is an important and controversial issue, but it cannot, in my opinion, be compared to the issue of slavery.

The preeminent issue is the right to life and all that entails, not just abortion.

“The constitutionality of the death penalty is firmly settled by its explicit mention in the Fifth Amendment,” the platform states. “With the murder rate soaring in our great cities, we condemn the Supreme Court’s erosion of the right of the people to enact capital punishment in their states. In solidarity with those who protect us, we call for mandatory prison time for all assaults involving serious injury to law enforcement officers.”

How does that support the right to life?

Pope Francis, addressing the International Commission Against the Death Penalty in 2015, said, “Today the death penalty is inadmissible, no matter how serious the crime committed.”

He said further that capital punishment is an offense “against the inviolability of life and the dignity of the human person, which contradicts God’s plan for man and society” and “does not render justice to the victims, but rather fosters vengeance.”

There is no greater opponent to abortion than Pope Francis. He has said that the right to life is the “most fundamental” of all and that is first a human right, not a religious issue.

The right to life also includes economic inequality, climate change that leads to more death from destructive weather, and policies that break up immigrant families and threaten the sanctity of life. And what about the kind of inept leadership and phony assurances that contributed to many of the 220,000 plus corona virus deaths? Is that not a right to life issue?

And racism? That’s another right to life issue because yes, black lives matter.

“We cannot tolerate or turn a blind eye to racism and exclusion in any form and yet claim to defend the sacredness of every human life,” the pope was quoted as saying after the Minneapolis police killing of George Floyd in May.

Not all bishops agree with Stika.

“A Catholic cannot vote for a candidate who favors a policy promoting an intrinsically evil act, such as abortion, euthanasia, assisted suicide, deliberately subjecting workers or the poor to subhuman living conditions, redefining marriage in ways that violate its essential meaning, or racist behavior, if the voter’s intent is to support that position. In such cases, a Catholic would be guilty of formal cooperation in grave evil. At the same time, a voter should not use a candidate’s opposition to an intrinsic evil to justify indifference or inattentiveness to other important moral issues involving human life and dignity.” (emphasis added)

Here, from an article in the National Catholic Reporter, is what Bishop John Stowe of Lexington, Ky., had to say about it:

“For this president to call himself pro-life, and for anybody to back him because of claims of being pro-life, is almost willful ignorance. He is so much anti-life because he is only concerned about himself, and he gives us every, every, every indication of that.”

“Pope Francis has given us a great definition of what pro-life means,” Stowe said at a webinar. “He basically tells us we can’t claim to be pro-life if we support the separation of children from their parents at the U.S. border, if we support exposing people at the border to COVID-19 because of the facilities that they’re in, if we support denying people who have need for adequate health care access to health care, if we keep people from getting the housing or the education that they need, we cannot call ourselves pro-life.”

My question to Bishop Stika: How would you respond the pope, the USCCB and to your colleague, Bishop Stowe?

I have long believed that affordable pre- and post-natal health care and parenting education will be far more effective in reducing the number of abortions than making abortion illegal. Of course I can’t prove it, because when something is illegal, no one keeps count. But prohibition taught us that making something illegal that a lot of people think is ok does not make it go away; it only drives it underground. Certainly, prohibition did not make alcohol unavailable. When we moved to Knoxville in 1953, liquor was illegal, but the bootleggers had the city divided up into districts. If you called the wrong bootlegger, he referred you to the one in your district for your order.
As far as slavery is concerned, the Catholic Church does not have much to be proud of. In the book by John Noonan, “A Church That Can and Cannot Change,” he notes that in 1452, Pope Nicholas V granted the Portuguese king the right to make war on African infidels and “reduce their persons to perpetual slavery” thereby beginning the African slave trade. Later in 1839 when Pope Gregory XVI finally condemned the slave trade, the Bishop of Charleston, John England, published a series of articles showing that the Catholic Church had always accepted slavery as lawful. The Confederacy included a number of Catholic leaders including General P. G. T. Beauregard of New Orleans, a distant relative of mine, and Admiral Raphael Semmes of Mobile. My own Catholic great-grandfather served under Lee in the Louisiana Division of the Army of Northern Virginia. Our culture today allows us to see the evil in slavery that our ancestors’ culture did not reveal.
(Professor Emeritus John Prados is retired after serving more than 50 years in the Engineering College of the University of Tennessee at Knoxville in a variety of positions, from faculty member to vice president of the university. He is a founding member of St. John XXIII University Parish in Knoxville)

One Response to Is abortion the preeminent issue for Catholic voters?