A week after we arrived in Santiago on our second visit to Chile, we were on another airplane flying toward the Atacama Desert, a place I had never heard of before. We left late in the afternoon for the two-hour flight on a LAN chile Airbus from Santiago, heading

Sunset into the Pacific on flight to Alama

almost due north for 765 miles to Calama. It was a pleasant flight with a spectacular sunset over the Pacific to our left.

As on our first visit at Christmas-New Year’s 2011-2012, we were in Chile to visit our son Edgar, his wife, Angela, and their four children. They have lived in Santiago about four years. Edgar is the chief legal officer for Enel Latin America, a subsidiary of the giant Italian energy company.

As our plane began its final approach to Calama, a city just north of the Tropic of Capricorn, about 9:30 p.m., we could see below us a sea of flashing red lights. Since our plane was flying directly over them, I thought they were some sort of navigation aid. We learned later that the lights were atop windmills in Enel’s huge wind farm near Calama. 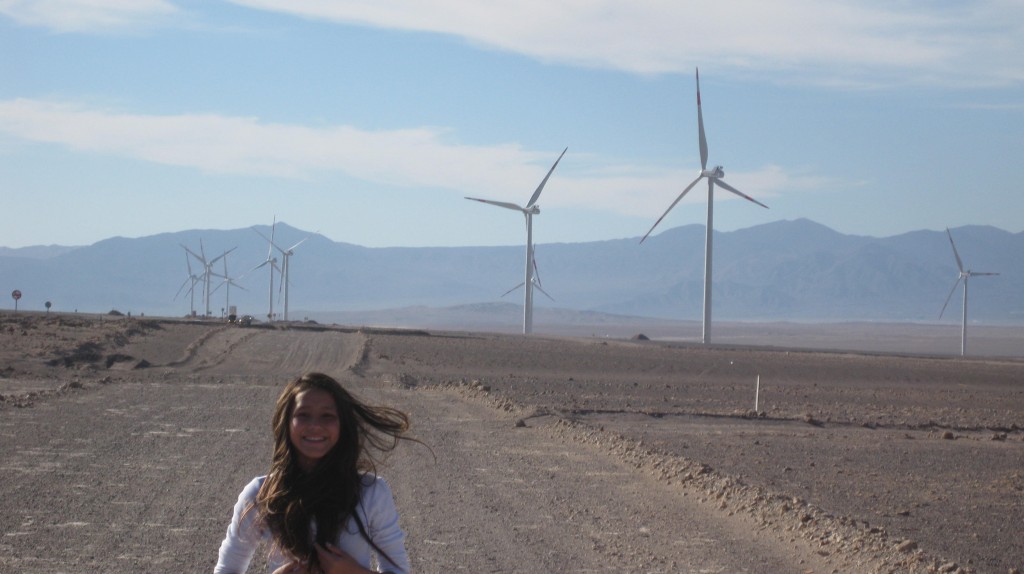 Carolina at the windfarm near Calama

In Calama, we rented two vehicles. The negotiations for the vehicles, although my daughter-in-law had reserved them before leaving, took about an hour. Instead of the SUV she had wanted, we got a pickup truck with an extended cab and four-wheel drive. Angela drove the sedan and Edgar and I and two of the kids went in the truck for the hour and a half drive to San Pedro de Atacama, our destination. We drove through the wind farm area but it was so dark we could see very little other than the flashing red lights we had seen from the air.

When we pulled into San Pedro de Atacama shortly before midnight, I thought we had mistakenly gotten into a slum. The streets were narrow and unpaved. The buildings, none higher than two stories, looked like they were constructed of dried mud. The dirt streets were mostly deserted, save for a few young stragglers coming out of the restaurants and bars, which were closing for the night. The restaurant where we were supposed to meet the owner of the cabins where we were staying was closed.

Fortunately, Angela reached her by cell phone, and she agreed to come into town to lead us to the cabins. We followed her through the village onto a road, also unpaved that led into the desert. Then she turned off into what looked like a field, but turned out to be a narrow country lane just wide enough for one vehicle. After a couple more minutes, we turned off the little lane into a courtyard where the headlights showed four small rectangular buildings that looked like a cheap motel or a trailer park.

I kept thinking, “What have we gotten into?”

But when we went into the cabins we were pleasantly surprised. They were spacious, with a small kitchen, dining area and sitting area as well as an inside bathroom and two good-sized bedrooms. There were large screen television sets in each room. And the rooms appeared to be spic and span. I relaxed a bit. 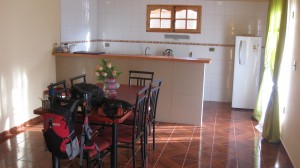 The next day we went into San Pedro and quickly saw that, contrary to our midnight impression, it was a charming little town, bustling with tourists and small shops catering to them. The “tourists” were mostly young backpackers, undoubtedly en route to the nearby Andes.

The Atacama region is billed as “the driest spot on earth.” One website I visited proclaimed: “In fact, it has hardly ever rained here in recorded history.”But while we were there it rained, not much, but rain nonetheless.

A historic, if ironic, occurrence. As brief as it was, it produced perhaps the most spectacular double rainbow I’ve ever seen.

For a place so dry, I was surprised also at the amount of vegetation around San Pedro. It was like an oasis in the desert. Edgar, Angela and the kids went higher up into the Andes one day to visit the famous El Tatio geyser field. Since the area is about 14,000 feet above sea level, Ghislaine and I decided to stay behind. Another day we visited the salt ponds in the area.

The Atacama Desert occupies 41,000 square miles in northern Chile, as area almost as big as Tennessee, extending from the Pacific in the west to the Andes in the east. To the east is Bolivia and to the north Peru. This is a region of llamas and alpacas, and garments and other articles made from their wool abound. It is also the area where much of Chile’s famous copper comes from.

The visit to the desert was quite a change from the trip we took in 2012 to the south. On that trip, we drove down — about 12 hours — to Pucón. A friend and business partner of another son, John, has a kayaking school and camp near Pucón, and we stayed there next to a whitewater river amid lush vegetation in contrast to some of the moonscape-like areas of the Atacama. 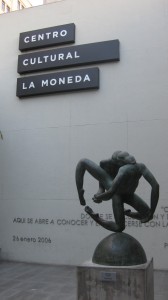 Sculpture at entrance to Cultural Center

Except for a one-day excursion to the beach at Viña del Mar, about two hours away, the rest of visit to Chile was spent in Santiago. Ghislaine and I took the Metro downtown one day and wandered around, visiting the Cultural Center near the La Moneda presidential palace. The center features an unusual sculpture at the entrance (see photo).

Two other events stand out: First was a delightful visit with very dear friends from my days with the Associated Press in Brazil, Eduardo and Mati Gallardo. Eduardo is retired after winding up an illustrious career with AP as bureau chief in Santiago in his native Chile. Joining us for dinner at his home was Sergio Carrasco, another retired AP man who holds the longevity record with the news agency where he worked for 57 years all around the South American continent. He started with AP as a messenger boy in Santiago at age 14. It was a great night of reminiscing and remembering the “good old days.” 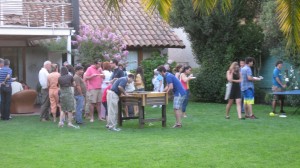 The "churrasco" in backyard

The other event was a garden party at Edgar and Angela’s home. Nearly 40 people showed up for the barbeque (churrasco) around the patio and pool in their backyard. It was truly an international event with guests from Chile, of course, Brazil, Venezuela, Italy, Germany, China, Taiwan, and, of course, the U.S. 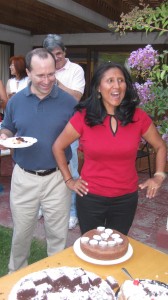 It was also Angela's birthday party and, of course, there was a cake

Carolina in her riding habit

But the overall highlight of the trip was none of this: It was just being with our son, daughter-in-law and, especially with our four grandchildren, Lucas, 17, Danny, 15, Carolina, 12, and Sofia, 7. Lucas is almost grown up and already looking forward to college, hoping for a possible appointment to a U.S. military academy.Danny is busy with his scientific experiments and inventions. Carolina is an accomplished swimmer and horsewoman. Sofia is still into her dolls and stuffed animals. 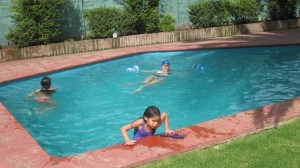 The girls joined Ghislaine and me almost every day when we would do our water aerobics in Edgar’s backyard pool. The first day we were discussing which exercises to do. Sofia listened intently to us, the suggested: “And then there’s swimming!” 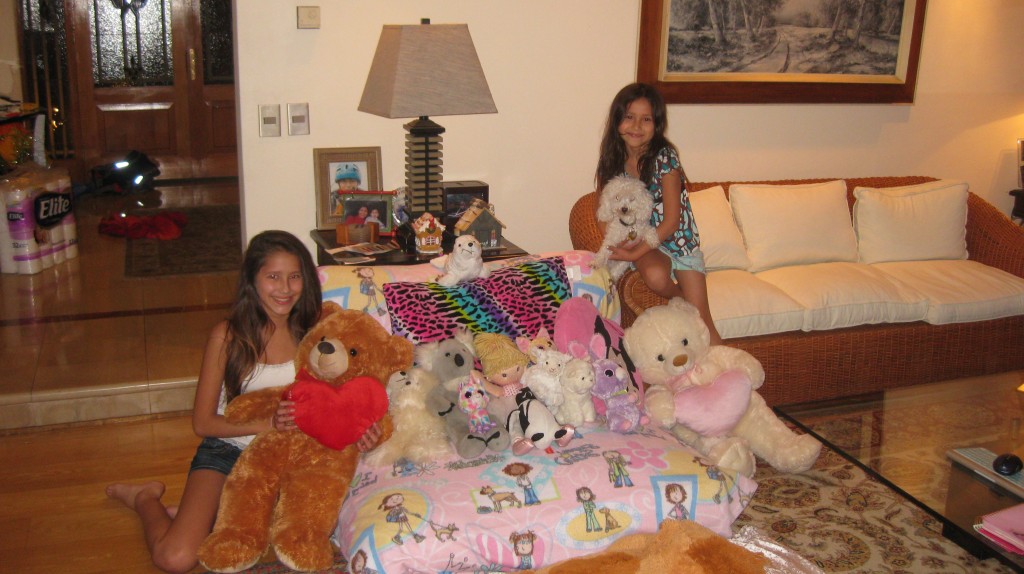 Sofia and Carolina and friends 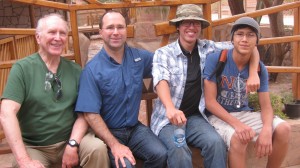 The men of the family: from left, Ed, Edgar, Lucas, Danny

Chile’s summer weather for our entire trip was spectacular: warm days with highs in the high 70s or low 80s and cool nights in the 50s.

The visit confirmed my earlier impression that Chile is the most advanced country that I have visited in Latin America. It has good roads and things seem to work efficiently. It also struck me as a very clean country, without a lot of litter and debris on the roads and streets.

I am always surprised when I talk to people who know very little about this amazing country, except perhaps that it’s in Latin America and had a very repressive military regime starting in the 1970s.

The days of Pinochet and his military cronies are in the past, and Chile today is a thriving democracy. In March, Michelle Bracelet, a member of the Socialist Party, will again take the oath of office as president. She previously served as president from 2006 to 2010, the first woman ever to be president of Chile.

Chile is a 2,670-mile long, narrow (217 miles at its widest spot) country on the west coast of South America, bordered by Peru to the north, the Andes mountains, Bolivia and Argentina to the east, and the Pacific Ocean to the west. What many people don’t realize is that it lies to the east of the United States.